What My Kids Are Reading #7 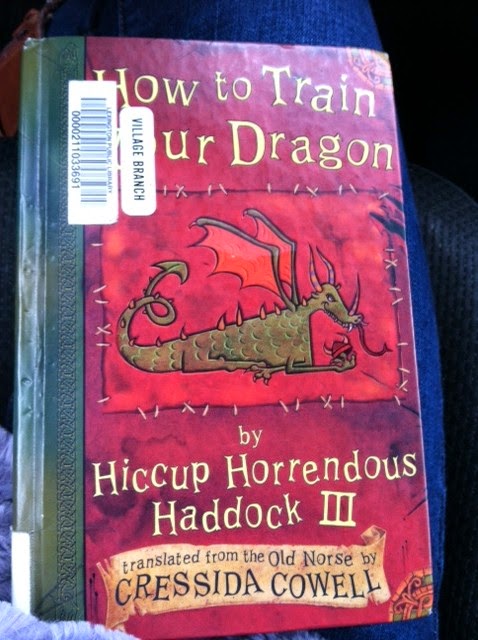 Snapped a picture on the way to returning it to the library.

You guys know what I'm talking about.

"Mom, if we eat all our dinner can we watch so and so?"

"Can we please watch a little of so and so before we go to bed?"

So if it is something like "The Backyardigans", "Amazing World of Gumball" or "Caillou".

It makes you want to pull your hair out.

Every once and a while, my kids will stumble upon a real gem - a diamond in the rough, if you will.

In my opinion, these movies are the best kids movies out there. Heck, they are just good movies period!

When I discovered that they were based on a series of books, I knew we just had to check them out.

They are chapter books written as Hiccup's memoirs. There are a series of 8 books in all.

This was our first chapter book so I wasn't sure if the kids would like them.

My 4 year old will sometimes listen but my 6 year old loves them! He listens intently and always wants me to read a little more so we can see what happens next.

At bedtime, I usually read two picture books for the little one before delving into the chapter book for the bigger one.

They are slightly different than the movies but still very funny, adventurous and LOTS of dragons.

If you are looking to introduce your child to chapter books, The How To Train Your Dragon Series is a great place to start.
Posted by Michelle at 12:00 AM No comments:

What I Learned From Watching The Hobbit Movies

Tuesday, I ventured into society to watch the latest Hobbit Movie, The Battle Of The Five Armies.

This movie was nothing short of amazing.

I laughed. I cried. I lusted.

What I mean to say is that I learned a lot from watching these movies.

And because I love you so much, I am going to impart my wisdom to you.

There is no need to thank me.

So without further ado...

What I Learned From Watching The Hobbit Movies:

1. Golem is terrifying. I've seen a lot of scary stuff. In fact, I LOVE horror movies. Vampires? Love 'em. Werwolves? Adore 'em. Zombies? One Word - Daryl. *Drops mic.* But Golem?! *Shudders.* He seriously scares the feces right out of me. Gives me nightmares. I'm not sure what it is about that bald, green thing, but he TERRIFIES me. "My precious." Ack! Now, I'm never going to sleep tonight.

2. Legolas is one felxible mo fo. Remember in Return of The King when Legolas takes out the elephant and slides down his trunk? Well, in this final movie, he does some fancy foot work battling with a huge orc that is insane. He bends and swivels and jumps. At one point, it looks like he is walking on air. Maybe Legolas was a yoga instructor/ ninja in a previous life?

3. Where has Luke Evans (i.e. Bard) been all my life. Luke Evans plays Bard the Boatman in this movie. Not sure who he is? Go ahead. Look him up. I'll wait. *Drums fingers.* Oh, your back? SEE?!?!? What did I tell you? Totally dreamy right? This guy is some serious hotness. That face. Those eyes. Luke Evans - we need more of you. Like A LOT more.

4. Old people can still whoop your butt. It makes me chuckle how people who do not know Gandalf always underestimate him. They think he is some random old vagabond. I'm thinking "Idiot! You don't know who are messing with. You are fixing to get dealt with! You don't mess with Gandalf!" But I'm not going to lie. When I saw Sauron wield his staff with the agility of Jet Li or Jason Statham, I was impressed. I was like, "Dang. Gramps has some mad skills." Moral of the story: Never underestimate an old guy. They could be a wizard and whoop your sorry behind.

5. Bromances are cool. I'm sure you guys are familiar with at least one bromance. But I think Bilbo and Thorin finally made it PC. I mean how can one not like the love felt between Bilbo and Thorin each time they share a heartfelt moment, gazing lovingly into each others eyes, and silently sharing in their adoration for each other. It's enough to get this girl a little choked up. *Sniff.* Now, we just need a cute name. Bilbin? Thorbo? Dwarbit? I'll let you decide.

Did I miss anything?

If you had not had a chance to see this latest movie, go and see it over Christmas break. If you have not seen any of the movies, go and get the first in the series from Netflix immediately!

Now, I'm off to dream about Luke Evans, er, I mean fold the laundry.

Twas The Night Before Mossey Christmas

'Twas the night before Christmas and all through the house,

My children were acting like lunatics. Time to call in the spouse.
The stockings were haphazardly thrown on the mantle without care,
in hopes that Santa Claus would shove some stuff in there.

Hubby and I were trying to nestle our kids in their beds
But they kept using stall tactics instead.
But finally, me in yoga pants and Hubby in sweats from the Gap,
Hoped we could get some quiet for at least a small nap.

When downstairs in the great room, we heard a loud noise!
We thought for sure it was one of the kids' toys.
Hubby and I did rock-paper-scissors to determine who would go see.
When lo and behold, it turned out to be me.

The light from the kitchen gave a soft glow
So I could see clearly the first floor below.
Surely I'm not seeing what I think I see!
Some joker dressed in red under my tree.

He turned right around and I punched him in the face.
He yelled, "Good night, woman! You're a nut case!"
I said, "I'm not the one breaking and entering, fat man."
Santa said, "That IS what Santa does. It's part of the plan."

I took in his red outfit, his black boots and his huge pack.
I couldn't help wondering 'Does he have a bad back?'.
I said, "You don't look so good, old man. Here, have a seat."
Sighing, he said, "Going around the world in one night is no easy feat."

Running a hand over my face and sitting at the table,
I thought, "Am I really talking to Santa? I must be unstable."
I said, "Rest a minute, Santa. I'll pour you a glass of whatever we've got."
Santa said, "Do you have Corona Lite? I like that a lot."

We sat at the table. We sat there we two.
And we clinked our beer glasses and chugged down our brew.
I asked, "Santa, how do you do it each year?"
He chuckled and said, "Well, it can be tough when many people are without cheer."

I said, "So many people are grumpy, hateful, and downright mean."
Santa said, "Oh my dear! Some of which the likes you have never seen."
I said, "I take it you've seen some pretty horrible stuff."
He paused then said, "Yes, I have. I have seen mankind act pretty rough."

Swirling the last of my beer in my glass,
I looked at Santa and dared to ask, "How can you do it with so many on the naughty list?"
Santa smiled at me and playfully hit my shoulder with his fist.
He said, "Because as long as there is at least one person in this world who cares about others,
I know there is hope for our daughters, sons, fathers and mothers."

This time, I looked, really looked, at this old man in front of me.
My heart realized what it was that I see.
Santa wasn't merely a jolly old elf.
He was the best part of each person, the good inside of our self.

Santa picked up his pack and flung it over his shoulder.
Turning to look at me, he said, "Don't worry. You get wiser as you get older."
He continued saying, "Remember to look in your heart for what you know to be right.
And mostly importantly, hold your husband and your children real tight."

Before I knew what I was doing, I gave Santa a hug.
He patted my head and told me, "And here, you thought I was a thug."
Opening the front door, I said, "Glad you stopped by."
Saluting me, Santa said, "I'm off!" and he took to the sky.

I watched as he jumped in the sleigh and took flight.
Wondering, 'Exactly how much beer did I have tonight?'
I heard Santa exclaim as he drove out of sight,
"Merry Christmas to all and to all a good night!"
Posted by Michelle at 12:00 AM No comments:

A Conversation With Wednesday 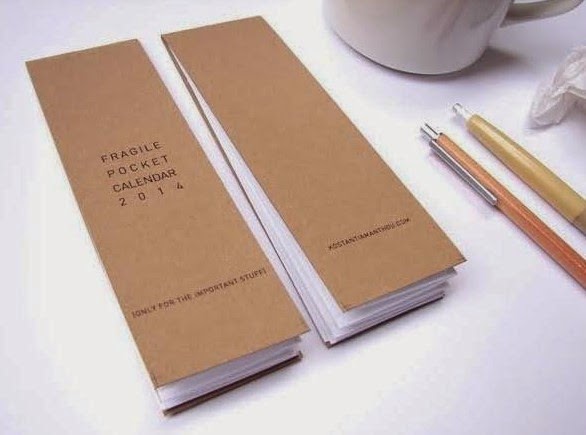 Wednesday: Are you going on a trip?

Me: What? No. What made you ask that?

Wednesday: Because you're carrying a bunch of bags. Under your eyes.

Me: Really? That's what your going with? Before I've even had coffee?

Wednesday: *Chuckles* Oh come on! It was funny.

Wednesday: *Sighs* I just want you to like me.

Me: What do you mean? Everybody likes you. You're "Hump Day".

Wednesday: Here we go again! Another "hilarious" reference to "Hump Day". Ha ha ha - it's "Hump Day"!  Nothing like alluding to doing the "horizontal bop". Or "making the beast with two backs".

Wednesday: *Sobs.* You know it's true! Let's make fun of the middle guy!

Me: *Awkwardly pats Wednesday on shoulder.* I don't think that's what it means.

Me: I think people call it "Hump Day" because the week starts out rough. We are overwhelmed because of all the things that need to be done. But Wednesday. Wednesday is the summit. The highest point. Once we make it there, we feel a sense of accomplishment and relief, knowing the rest of the week will be easier because it is downhill.

Wednesday: *Sniffles.* You really think so?

Wednesday: *Grins.* You are pretty awesome.

Wednesday: Let's go get you some coffee and unpack those bags!

Wednesday: I'm not only the best part of the week but I'm also the funniest.

Me: Hilarious.
Posted by Michelle at 8:24 AM No comments:

Michelle
Hello there! Thanks for stopping by. Let me tell you a little about myself. I am a mom, daughter, friend, werewolf and dragon. Okay, I am not actually a dragon. I love babies, books, sweets and nice people. Life can be difficult, but it can also be absolutely amazing. Keeping your sense of humor sure helps!